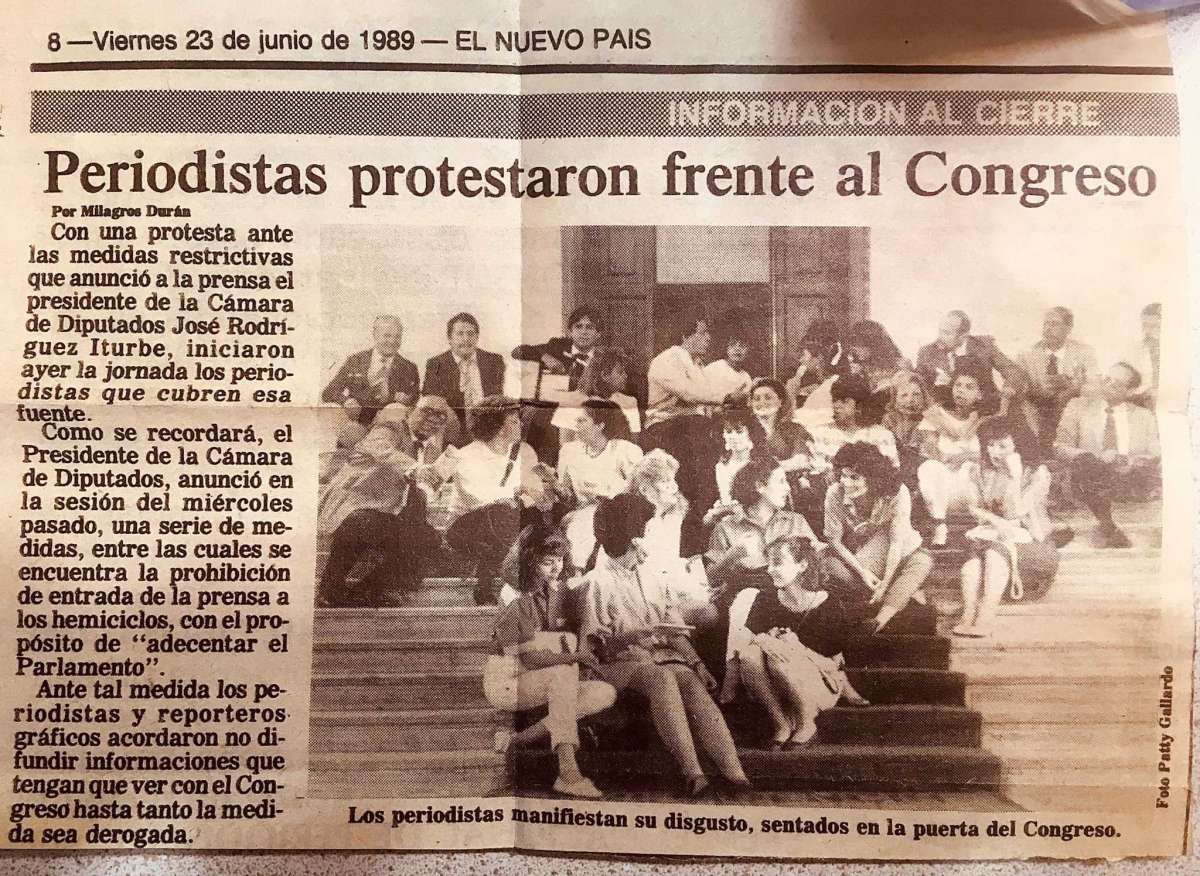 I have to confess that I knew I wanted to say something about the violent Jan. 6 siege on the U.S. Capitol, but I wasn’t sure what it was. And that, even though I wasn’t quite sure what it was I wanted to say, and I had no confidence I would figure it out in time to reach my deadline, I still made the choice to ditch my extremely, probably overly researched topic for my monthly column, and instead quickly write about the insurgency (which seems too dignified a word for the monstrous crimes that took place) even as it was still unfolding.

The result is my column for Hearst Connecticut Media examining the invasion of the Capitol, the murder of at least one police officer and the attempted assassination of our leaders, through the lens of a peaceful protest I accidentally took part in during my 1989 internship at El Nuevo Pais, a right-leaning tabloid in Caracas, Venezuela. You can see me “sitting in” in the photo attached: I am sitting on the front row to the right.

As the chaotic images flashed across my TV screen on Jan. 6, 2021, my mind seemed to be circling around a loop of related thoughts and memories that had something to do with the fragility of democracy and the illusion of safety afforded by the parallel illusion of American exceptionalism, and how that related to my experience as a young novice reporter during the summer I spent in a pre-Chavez, pre-authoritarian Venezuela.

At the time, Venezuela was the most stable democracy with the wealthiest economy in Latin America. The country’s elites enjoyed life in a culturally rich cosmopolitan world capital, and that summer I caught a small glimpse of it. The young people I met through my family and my job could not have imagined having to flee their homeland. They were glamorous, worldly, confident about their future and their country’s. Elites in America would do well to consider their fate. Venezuela has experienced authoritarian rule, economic collapse, environmental catastrophe, and famine in the decades since I worked there, and nearly everyone I met that summer has been forced to flee, in some cases literally for their lives.

There is a mythology of the Trump-supporting yahoo, the duped bumpkin, who bears no resemblance to the creative and academic classes that have most consistently criticized Trumpism and the alt-Right. They, we, need to think again about who the perpetuators of the Big Lie really are. Not a few protestors traveled to the Jan. 6 event by private jet to take down our government. “They” are not so different from “us,” especially among whoever the “they” and the “us” are who identify as white.

And where do Latinos align ourselves? With traitors like Ted Cruz? With domestic terrorist apologists like Marco Rubio? That is a move as foolish as Jewish Stephen Miller aligning with a horde of folks wearing pro-Nazi T-shirts. And yet my own family includes believers in Trump’s Big Lie.

So many writers have said that when we write, rather than start out with a big, fully formed idea we want to get down on paper and convey to the world, we instead learn what we think through the writing itself – we write our way to understanding.

Daily newspaper writers, and these days, minute-by-minute digital reporters, write the first drafts of history. If they are any good at their jobs, they try to be as transparent with the corrections and clarifications that inevitably come later as possible. On the Op-Ed side of things daily deadlines mean that you are thinking aloud as that history unfolds around you in real time.

I know I have not yet arrived at my final understanding of even how my own idiosyncratic perspective and life experience connects to this moment. I only know that it does. For now, I offer these first-draft attempts at something like making sense of the chaos and danger that surrounds us in this present moment.